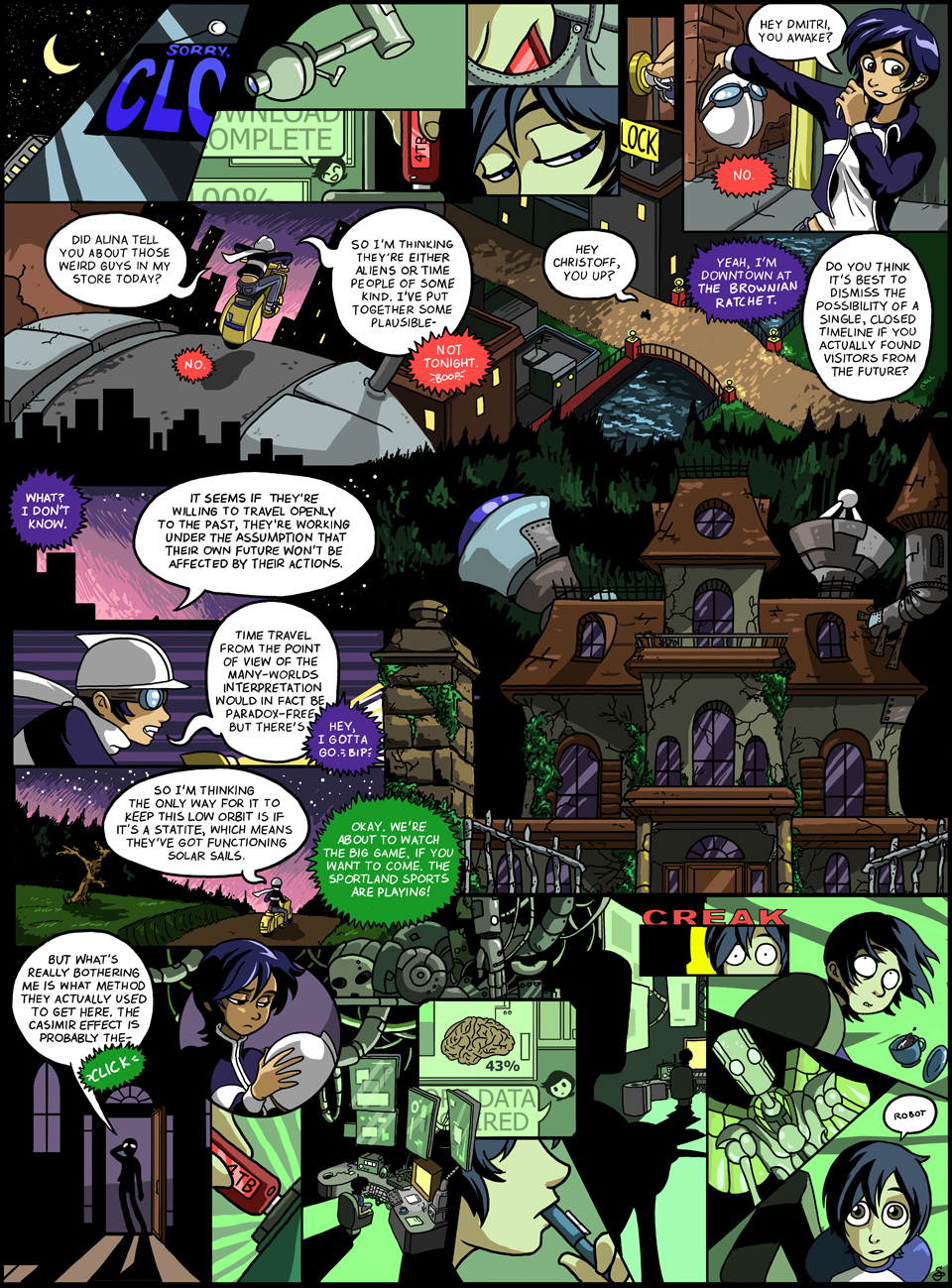 I don’t have anything especially interesting to share this week, no new webcomic sites or fantastic adventures to share. Instead, I am going to talk about the Niels Bohr/Albert Einstein debates of the late 1920’s and early 30’s. For a good part of his professional life Einstein opposed most of the fledgling Quantum theory, primarily due to the epistemological implications of Heisenberg’s Uncertainty Principle. Bohr was one of the most noteworthy architects of this new body of theories, and since he and Einstein were pals in the first place, it wasn’t long before they exchanged in a set of debates over Einstein’s own ingenious thought experiments set up to challenge the orthodoxy of Quantum Mechanics. What follows is the second thought experiment and also my favorite, which involves Einstein’s famous box:

“At the sixth Congress of Solvay in 1930, the indeterminacy relation just discussed was Einstein’s target of criticism. His idea contemplates the existence of an experimental apparatus which was subsequently designed by Bohr in such a way as to emphasize the essential elements and the key points which he would use in his response.

Einstein considers a box (called Einstein’s box) containing electromagnetic radiation and a clock which controls the opening of a shutter which covers a hole made in one of the walls of the box. The shutter uncovers the hole for a time Δt which can be chosen arbitrarily. During the opening, we are to suppose that a photon, from among those inside the box, escapes through the hole. In this way a wave of limited spatial extension has been created, following the explanation given above. In order to challenge the indeterminacy relation between time and energy, it is necessary to find a way to determine with an adequate precision the energy that the photon has brought with it. At this point, Einstein turns to his celebrated relation between mass and energy of special relativity:

. From this it follows that knowledge of the mass of an object provides a precise indication about its energy. The argument is therefore very simple: if one weighs the box before and after the opening of the shutter and if a certain amount of energy has escaped from the box, the box will be lighter. The variation in mass multiplied by

will provide precise knowledge of the energy emitted. Moreover, the clock will indicate the precise time at which the event of the particle’s emission took place. Since, in principle, the mass of the box can be determined to an arbitrary degree of accuracy, the energy emitted can be determined with a precision ΔE as accurate as one desires. Therefore, the product ΔEΔt can be rendered less than what is implied by the principle of indeterminacy.

The idea, like all of those advanced by Einstein, is particularly acute and the argument seemed unassailable. It’s important to consider the impact of all of these exchanges on the people involved at the time. Leon Rosenfeld, a scientist who had participated in the Congress, described the event several years later:

It was a real shock for Bohr…who, at first, could not think of a solution. For the entire evening he was extremely agitated, and he continued passing from one scientist to another, seeking to persuade them that it could not be the case, that it would have been the end of physics if Einstein were right; but he couldn’t come up with any way to resolve the paradox. I will never forget the image of the two antagonists as they left the club: Einstein, with his tall and commanding figure, who walked tranquilly, with a mildly ironic smile, and Bohr who trotted along beside him, full of excitement…The morning after saw the triumph of Bohr.

The “triumph of Bohr” consisted in his demonstrating, once again, that Einstein’s subtle argument was not conclusive, but even more so in the way that he arrived at this conclusion by appealing precisely to one of the great ideas of Einstein: the principle of equivalence between gravitational mass and inertial mass. Bohr showed that, in order for Einstein’s experiment to function, the box would have to be suspended on a spring in the middle of a gravitational field. In order to obtain a measurement of weight, a pointer would have to be attached to the box which corresponded with the index on a scale. After the release of a photon, weights could be added to the box to restore it to its original position and this would allow us to determine the weight. But in order to return the box to its original position, the box itself would have to be measured. The inevitable uncertainty of the position of the box translates into an uncertainty in the position of the pointer and of the determination of weight and therefore of energy. On the other hand, since the system is immersed in a gravitational field which varies with the position, according to the principle of equivalence the uncertainty in the position of the clock implies an uncertainty with respect to its measurement of time and therefore of the value of the interval Δt. A precise evaluation of this effect leads to the conclusion that the relation