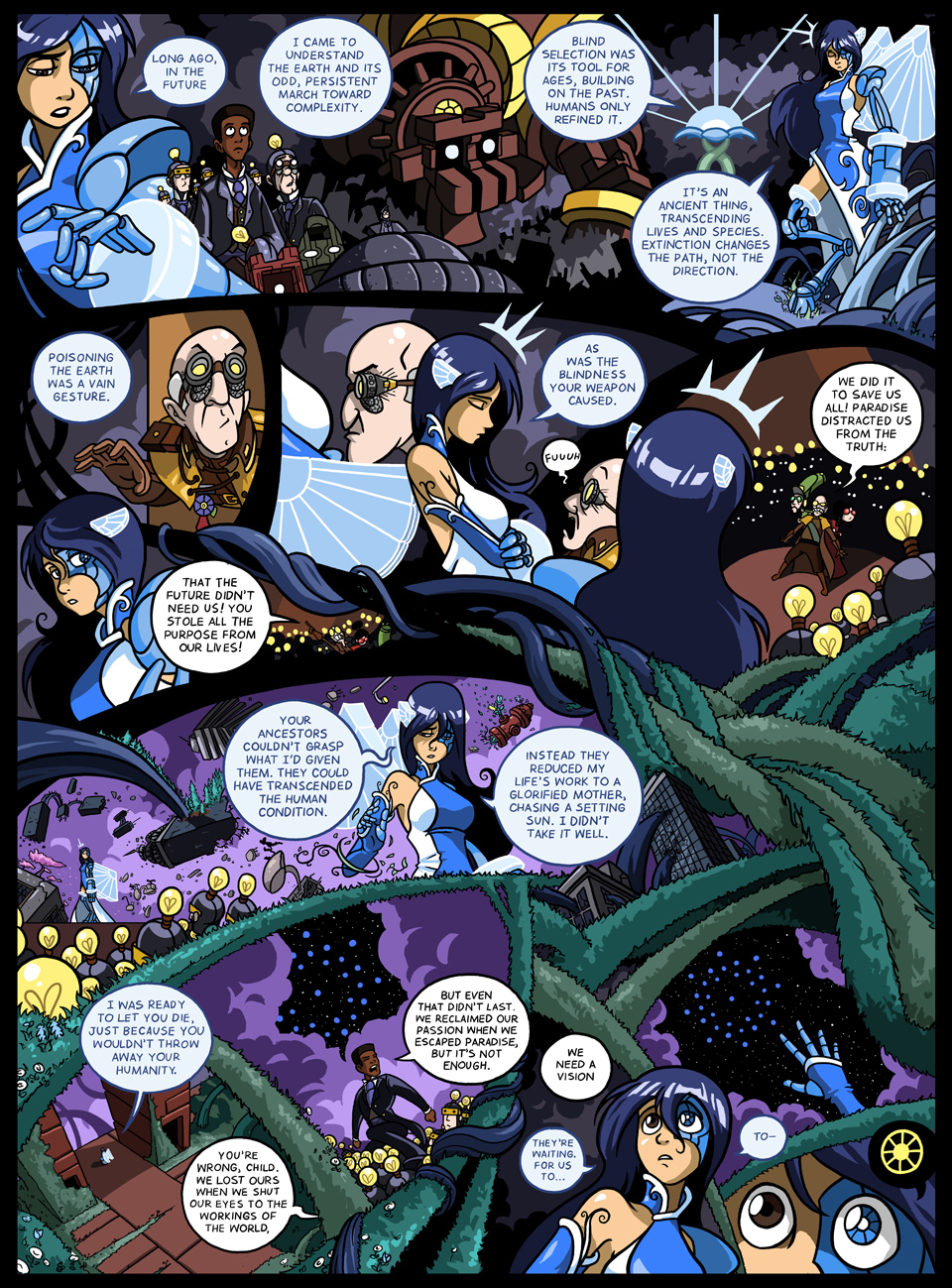 I’m back! Jesus, my face still hurts a bit after my recent adventure, but my hands work well enough to draw things again.

I don’t usually like to comment on the comics, but you may be thinking “Hey Aaron, how can evolution by way of natural selection have any sort of direction? After all, most of the lifeforms on this planet (bacteria and the like) are the most primitive.” Before I address this directly it should be noted that when I use the term complexity, I mean it to refer to the minimal amount of information required to accurately represent something (eg: a car engine requires more information to be accurately described than a screwdriver, and is thus more complex, etc.).

While evolution doesn’t always select for the most complex organisms, it does tend to select for more sophisticated ecosystems, that is to say environments that have a higher number of non-zero-sum relationships (to use a game theory term) between organisms. This makes evolutionary sense, since organisms evolve to exploit different resources whenever possible, rather than filling identical niches. Two species that fulfill slightly different ecological niches are more likely to survive than two who perform the same function (not to mention the fact that it’s genetically unlikely two species will evolve identical functions). It’s not a natural law, of course, but it is a powerful statistical trend that becomes more significant given the immense span of time involved. The blindess inherent in natural selection generates diversity, and the push for surviability demands as many roles as possible to be filled, hence the exponential growth in environmental complexity (exponential because each iteration yields higher returns). The only instances when complexity drops is during extinction events, when for a plethora of reasons resources are depleted below the threshold of the ecosystem’s sustainability.

This trend also applies to human civilization. On a grand scale, natural selection is a mechanism for blind problem solving, though the computational power of such an approach is significantly lower than a single human mind. It is for this primary reason that the growth of sophistication (again the net increase of non-zero-sum relationships) within human societies is orders of magnitude faster than that of biological ecosystems. This is why again, barring ecological disaster, human civilization as a whole has increased in complexity over time, and like its biological equivalent does so at an exponential pace. It is once again important to note that humans have not increased in complexity by any significant degree. Rather, it is the societies themselves that conform to this trend. Cultures do not increase at uniform paces, naturally, due to a number of environmental factors, but the direction of complexity is ever-present.

This concept is usually extended to the more general idea of accelerating change, and, as many long-time readers know, was briefly touched upon in Dr. Klomp’s Essay on Trans-Simianism.